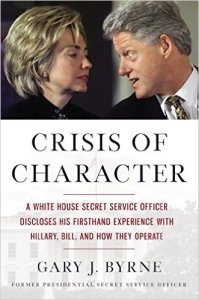 Having had the very important job of protecting President Bill Clinton and the First Family, former Secret Service Officer, Gary J. Byrne, in Crisis of Character: A White House Secret Service Officer Discloses His Firsthand Experience with Hillary, Bill, and How They Operate discusses his observations of the character of the President and his wife, Hillary Clinton, inside the White House. He also discusses the culture that emerged during the Clinton presidency. In his book, he explains how his dream of being a secret service agent became a reality when he was given the chance to protect President George H.W. Bush and the Bush First Family toward the end of Bush’s term. Byrne was later assigned as Secret Service Uniformed Officer outside the Oval Office during the Clinton Administration.

Reading Crisis of Character: A White House Secret Service Officer Discloses His Firsthand Experience with Hillary, Bill, and How They Operate by Gary J. Byrne educated me on the lifestyle and struggles of a Secret Service officer and the politics of the agency.  Author Byrne discusses the Clinton scandals including Whitewater, Vince Foster’s suicide, Travelgate, Filegate, Troopergate, Bill Clinton’s affairs (while president, in the White House and as former governor of Arkansas), the Monica Lewinsky trial and affair, and more. In every case, the Clintons denied allegations, and it came down to their word against others’ word. He discusses how Bill Clinton arrogantly denied his affair with Monica Lewinski until he was forced to acknowledge that he blatantly lied as evidenced by the taped conversations by Linda Tripp between herself and Monica. He also writes about what he witnessed in the White House from former First Lady, Hillary Clinton – her outbursts, rage, and violent behavior toward her husband. She also used abusive language towards the Secret Service officers on many occasions.

I recommend this book to anyone who is looking for the truth about the character of the Clintons from the perspective of someone who was assigned to protect them.  The author’s experience is an indication of what kind of culture we will have in the White House again, if Hillary Clinton should become president. There are positive and negative criticisms of this book that have arisen. I am not including them here.

To purchase a copy of Gary J. Byrne’s, Crisis of Character: A White House Secret Service Officer Discloses His Firsthand Experience with Hillary, Bill, and How They Operate, visit: Amazon.

© 2016, Vilma Reynoso, vilmareynoso.com,  Musings and Inspiration for Abundant Living for all Beings from One Creative Being